Difference between revisions of "Magnets"

In the process of editing and updating this page. Please contact Juliette Mammei crowder@jlab.org with questions or suggestions.

If one can not reset the magnet remotely: Do NOT go into the hall to reset by yourself. Contact RC and then tech on-call/magnet expert.

0. Clear all faults (if there are still problems with flows or liquid levels there is no point ramping back up to crash again).

If the dipole turns off, the first way to try to turn it back on is to do the following

If that doesn't work then notify the RC 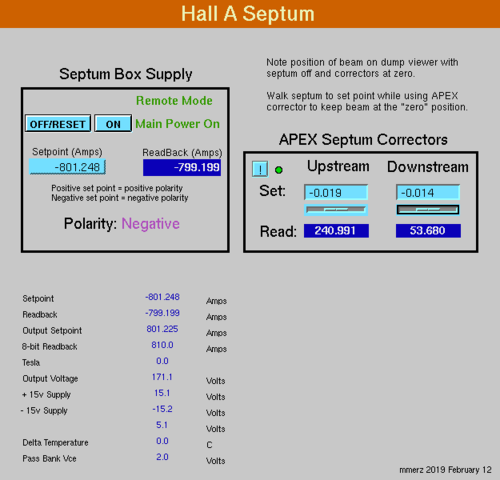 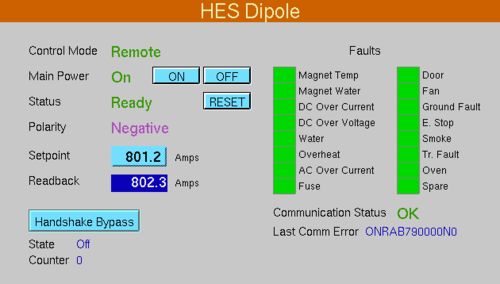 To check/set the septum current:

To reset the Septum magnet power supplies (CREX) after some problem (from Jack's log entry):

If Power Supply is on, and amplitude set, but magnet staying at 0A log entry

GUI can be found at:

How to check polarity

LHRS dipole, RHRS dipole polarity changes require an access. The rest can be changed with the power supply gui.

One should check the polarity with Gaussmeter. The Hall probes should read positive for positive particles and negative for negative particles (WITH CURRENT IN THE MAGNETS)

GUI can be found at:

While on shift, it's important to check the magnetic fields of the HRS magnets and the Septum. This is part of the shift checklist.

For the Dipole, the R-HRS is regulated by NMR and should be accurate for the given momentum. The L-HRS NMR is not currently working, so one should go by the Hall probe field, which however is not as accurate as NMR.

When an IOC is rebooted, the set points are put to the observed read-back values, and this might not be what you want ! (probably not, in fact)

The dipole is an iron dominated magnet so its actual field will change with current history (the reason to define hysteresis cycles) so, neither set or read-back currents are reliable. After a large current change, you will see both Hall probe and NMR (if it was working) changing (dp ~ several 10-3) over many hours.So, you want to use the Hall probe if the NMR is not available and adjust by hand as needed. Unfortunately, the Hall probe was not calibrated vs NMR measurements - you have to find a previous setting, preferably near to desired setting. Also, keep in mind that the Hall probe has lower precision than the NMR probe.

Rebooting an IOC. Note that there are differences between the set and read-back currents of the power supplies. There are many reasons for these differences. We use the read-back currents to determine the momentum of the quads based on cross checks done long time ago. The dipole currents are nor really relevant for the reasons described above. When an IOC is rebooted, it needs to initialize all its variables (these IOCs do not have such thing as an entire image of the system from x -time ago). One thing that it needs to do is to initialize the set current variables. It uses the read back currents to do so which will cause some changes in the magnets currents

The location of the elastic peak is very important for CREX. If the peak partly falls off the detector, our sensitivity to energy and subsequent noise in the asymmetry become significant. If the peak is too far in the other direction, we start getting contamination from inelastic states, which are dangerous at this relatively high Qsq -- ratio of inelastic to elastic is a few percent, which introduces a systematic error. Of course we should try to notice these things and make alignment adjustments. The alignment procedure and a checklist will be written elsewhere.